Ocala, Florida — Live entertainment, crafts, food, children’s activities, Jr. Sunshine Christmas parade, and a visit by Santa will all be a part of the 31st annual Light Up Ocala on Saturday, November 22, 2014, from 4-9 p.m. in historic downtown Ocala. This year’s theme is “It’s On!.”

Stages for the event will be located on North Magnolia Avenue, the downtown square and Citizens’ Circle. In order to accommodate pedestrian traffic between the north and south venues, SR 40/Silver Springs Blvd. will be closed adjacent to the square.

The highlight of the event will be the lighting of downtown Ocala and a 42-foot Christmas tree which is scheduled for 6:30 p.m.

Musical entertainment will include Norman Lee, Old Skool, James Wynn, Center Stage Band, Kaboozie Kazoo. This year’s main stage headliner on the square will be “Brick City Strings” and “Brick City” bands covering Transiberian Orchestra holiday favorites as well as popular music. At Citizens’ Circle, Mark Raisch and band will be singing songs from Sinatra, Micheal Buble and more! In addition, a wide array of dancers and musicians will be performing throughout the evening.

Additional entertainment and fun this year:

A “Whoville” themed kids zone at the north stage zone, which incorporates the Brick City Plaza where the animated “Grinch that Stole Christmas” will show on the big screen.
The downtown holiday skating rink, “Let’s Skate Ocala” will open at the event and will remain open through January 4, 2015. – $5 per person. We have nearly doubled the size of the rink, which will allow more space for you, family and friends!

Other activities will include:

Junior Sunshine Christmas Parade which will weave through downtown streets and includes more than 1,000 youth from the community.
5-8:30 p.m. – Santa will be in his sleigh to visit with children after the parade.
6:30 p.m. – City officials will kick off the holiday season with the Lighting Ceremony.
4-9:00 p.m. Angels – Living Statues
Sky High Juggling
Kid Events games and fun zones
Soccer Collies
Punch and Judy Puppet Show 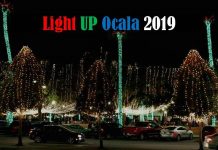 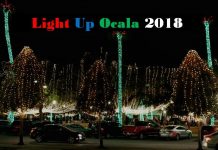