Ocala PostOcala Newspaper - News without hiding the truth
More
Home Politics Local Politics To the Editor: Should state colleges and universities be required to give... 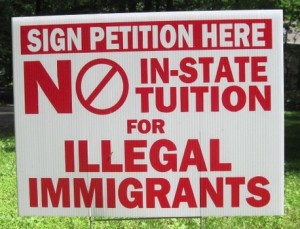 Florida — Following the Easter and Passover break, the Senate and House will be back in Tallahassee Monday for the final two weeks of Florida’s Legislative Session. I’m writing you today to share my perspective – and ask for yours – about an issue that’s on the minds of many folks who are emailing and calling me.

The question is whether the Florida Legislature should require that our colleges and universities provide taxpayer-funded tuition subsidies to ‘undocumented’ or ‘illegal’ students.

The legislation that deals with this issue is Senate Bill 1400. If you’d like to review the specific provisions of the bill, go to http://www.flsenate.gov/Session/Bill/2014/1400

In one form or another, a bill like this has passed the Florida House of Representatives in previous years, but has never passed the Senate. This year, the legislation has passed favorably out of three Senate committees. The sponsor, Senator Jack Latvala (R-Clearwater), has stated that a majority of members of the Senate, including Republicans and Democrats, are co-sponsoring the bill with him. The Speaker of the House, Will Weatherford, has made passing this bill a personal goal and priority.

Because of the high esteem in which I hold Speaker Weatherford, I have listened carefully to his arguments in favor of the bill. I am convinced he comes to his position sincerely, prayerfully and with great compassion. I respect him and I respect his advocacy for a cause he believes is right.

I am told it is “good politics” to support Senator Latvala’s bill, that it will help Republican candidates appeal to Hispanic voters in the 2014 and 2016 elections. Perhaps. It is certainly true that the Republican Party has lost much of the Hispanic support President Bush earned in 2000 and 2004 and that Governor Jeb Bush still has in our state and across the nation. As a Republican, I believe we have not just a political, but a moral obligation to apply our principles to the concerns and aspirations of Hispanics.

However, SB 1400 is not limited to Hispanics. It casts a blanket of approval over non-citizens who are in this country without proper legal status from anywhere in the world, including countries which are caldrons of terrorism and anti-American violence. There is no improper or careless intent behind the legislation, but this bill goes much further than merely reaching out to Hispanic voters.

Though I am likely in the minority in the Legislature on this matter, I cannot support taxpayer subsidies in the form of tuition discounts for undocumented or illegal students. I will vote against SB 1400.

Just days ago Governor Scott signed the Florida GI Bill, a joint priority of Speaker Weatherford and mine. Under one of the provisions of this historic law – designed to make Florida the most military-friendly state in the nation – our veterans of all armed services will receive in-state tuition discounts so they can earn degrees and build families, businesses, and successful lives here in Florida. This is truly an earned entitlement for sacrifice and service to our country.

I cannot equate the sacrifice of those who have volunteered to shed blood for this country with the claims, however compelling, of those who are here illegally. I cannot vote to treat these two groups the same.

The question posed by SB 1400 is not whether undocumented students will have access to a Florida public college or university education that is supported by Florida taxpayers – they already do. The question is the extent to which parents, struggling to save for their own children’s education, and taxpayers, slowly recovering from a deep recession, should be mandated to pay for substantially increased tuition subsidies for non-citizens, who have not attained legal status in our country. Inevitably, when colleges and universities incur an expense by discounting tuition for some, the cost is shifted to others – including Florida families with children in college and Florida taxpayers who are asked each year to send more public funds to higher education.

Our federal immigration laws are a mess. Democrats and Republicans alike have failed to face the issue honestly and effectively. And, real solutions are unlikely to be popular.

SB 1400 – however popular it may be with some – is not a solution and I cannot support it.

As always, I am grateful for your advice. Your guidance and insights – whether you agree or disagree with me – make me a better senator for Northwest Florida.

May you and those you love share a blessed Passover and Easter week.