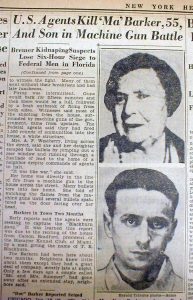 Ocklawaha, Florida — On Thursday, the house of infamous Arizona Donnie Barker, better known as ‘Ma’ Barker, will slowly float its way across Lake Weir by barge.

Arizona, the mother of those who ran the Barker gang, along with her son Fred Barker, were killed in a shoot-out with FBI agents on January 16, 1935.

According to historians, J. Edgar Hoover once described Arizona as “the most vicious, dangerous and resourceful criminal brain of [that] decade.”

For preservation reasons, the historic home is being relocated to the Carney Island Recreation and Conservation area, located at 13275 Southeast 115th Avenue, Ocklawaha.

Once there, the county will begin its plan to restore and preserve the house as a public museum.

Marion County officials said, “Opening the house to the public will showcase the 1935 triumph of good versus evil deemed the ‘Battle of Ocklawaha.’ Visitors will walk through the life-sized time capsule and see firsthand the bullet holes still peppering the furniture and walls after a four-hour stand-off with the FBI and local law enforcement.”

In a press release, officials said that the house currently sits on private property and is not open to the public. Therefore, motorists should expect pedestrian and traffic congestion along East Highway 25, where the home is currently located.

Officials said that Carney Island user fees have been waived to allow the public to watch from the beach, but the $7 fee for launching boats will remain in effect.

All boaters are warned to stay at least 500 feet from the barge and to treat the route as a no wake zone.

The trip should take approximately 30 minutes, providing everything goes as planned.

The barge is excepted to begin its short “voyage” at approximately 9 a.m.