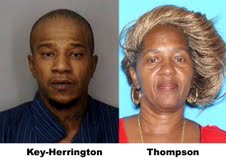 Polk County, Florida — Detectives with the Polk County Sheriff’s Office are asking for help from the public with an Attempted Murder Investigation.

At approximately 6 a.m., on Saturday, September 21, 2013, a shooting incident occurred in the area of Edwin Street, NE Winter Haven.

31-year-old Kelvin Lewis Key-Herrington of 518 Sears Avenue NE, Winter Haven, was identified as the shooter. The victim was transported to a local hospital to be treated for an injury to the hand.

66-year-old Deborah Mobley Thompson, Key-Herrington’s grandmother of 213 Avenue P NW, Winter Haven, approached a witness shortly after the incident and threatened the witness with violence if her grandson was identified as the shooter.

Both are considered to be armed and dangerous.

A $3,000 reward is being offered for the capture of Kelvin Key-Herrington.