Police say that based on video surveillance footage from inside the house charges will not be filed. Investigators say the surveillance system was set up inside the home after George Zimmerman was acquitted of shooting and killing Trayvon Martin.

Shellie Zimmerman told 911 operators George Zimmerman did have a gun and he was going to shoot her and her father, however Officer Hudson now says no one ever saw a gun nor was a gun recovered.

George Zimmerman’s attorney, Mark O’Mara says, “there was absolutely no threat with any firearm whatsoever.” O’Mara goes on to say that he knows the 911 tapes suggest that through Shellie Zimmerman’s account of the situation, but says she made those statements under the stress and emotion of the situation.

O’Mara confirms there may have been some pushing and shoving due to the divorce situation and says it is unfortunate that so many divorces start out in the manner the Zimmerman’s divorce has. O’Mara said, “I am grateful this situation didn’t cause any injuries to anybody whatsoever.”

Shellie Zimmerman says she will not peruse any charges against George Zimmerman. 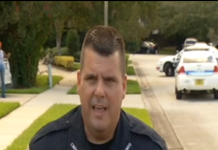