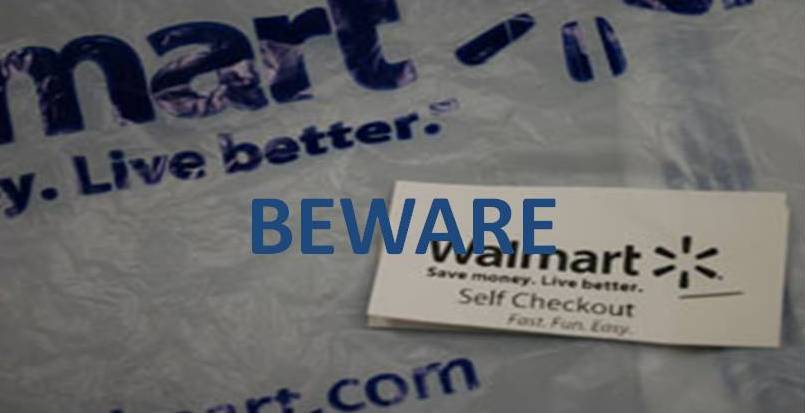 Consumers who shop at Walmart should pay extra close attention when using a self checkout kiosk.

Too often people rely on the capability and accuracy of technology; essentially making the human brain lazy when it comes to numbers & more specifically, numbers involving cash transactions.

Customers often times use self checkout due to the extremely long wait at Walmart checkout lines. Most have experienced the – one lane open – while the checkout line continues to “backup.”

Many consumers turn to the self checkout because a person’s time is important, and many are in a hurry to get out of the store.

Recent complaints to Ocala Post have revealed that self checkout kiosks at Walmart could potentially be scamming consumers out of thousands of dollars. Complaints indicated that while using two and three different methods of payment during a single transaction, customers were being overcharged.

What to watch for

Although some kiosks will only allow one or two methods of payment per transaction; the following task was performed using three.

A consumer is at the self checkout; it’s time to pay and you want to use three different methods of payment.

The consumer swipes the gift card valued at $11.00 then inserts $30.00 in cash at which point the kiosk screen reflects a remaining balance of $37.85. So, you then swipe your credit card. The screen shows $o.oo due and prints out a receipt, leaving you to believe that only the $37.85 has been charged.

After carefully inspecting the receipt you see that your credit card was actually charged $67.85 instead of $37.85. The receipt does not reflect the $30.00 in cash having ever been inserted into the machine, although it was reflected in the on-screen balance. Essentially, the kiosk has stolen $30.00 of your hard earned money.

Many do not check their receipts after leaving a self checkout kiosk because they have put their trust into a machine that is basically operated by a computer.

Two separate supervisors at two different local Walmart’s, of whom do not want to be identified, told Ocala Post that the self checkout kiosks malfunction a lot. And often times the customer does not realize they have been overcharged until they are already home or have checked their credit card balance.

Ocala Post contacted Walmart through their Facebook page and questioned the mistakes. Ocala Post’s question was deleted in less than two minutes with no further response from Walmart’s corporate office.

According to unnamed sources, Walmart began receiving multiple complaints in regards to the kiosks 2012. Some claim the malfunction is a “bug.” However, authorities said when the problem is allowed to continue after dozens of complains, it is no longer considered a bug.

If a Walmart self checkout kiosk scams 10 people a day, multiplied by number of stores and days in a week; the potential loss for consumers is quite large if the mistakes go unnoticed by the consumer. Moreover, if the shortage goes unnoticed by the customer, Walmart stands to profit hundreds and thousands of dollars from the mistakes.

Consumers should always check their receipts, even if it is a self checkout that is being utilized.