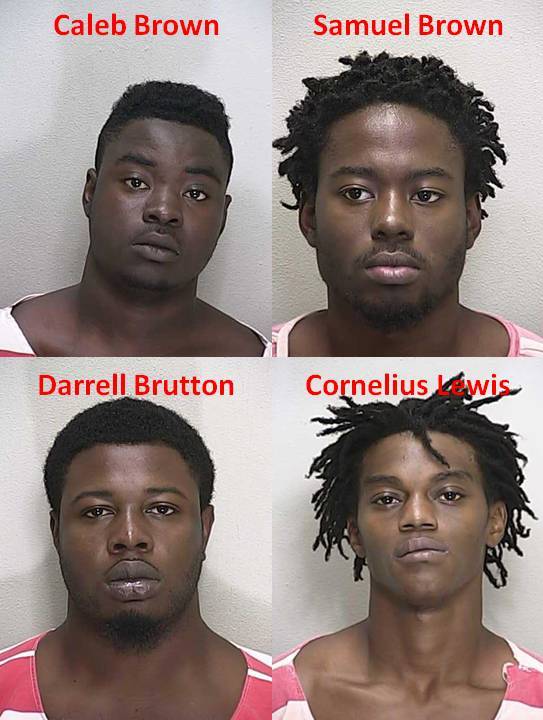 Ocala, Florida — The plan of four criminals to burglarize a Silver Springs Shores residence on Juniper Pass Way on Friday, September 26, 2014, nearly turned deadly after the home owner fought back.

According to reports, a deputy had stopped a Honda occupied by five (5) black males, one of which had been shot in the stomach, for speeding. The deputy determined four (4) of the suspects were fleeing from a home that the Sheriff’s Office had just received a 911 call on.

The victim stated to deputies that he heard a knock at the front door, but ignored the knock hoping they would leave.

The victim, whose home had burglarized the day before, stated he became concerned after the person at the front door kept knocking. The victim looked out the window and saw a tall black male standing at the door. He said the man was acting suspicious and kept looking at a motorcycle he had parked on his front porch.

According to reports, the victim grabbed his .45 caliber handgun and exited his back door planning to confront the man at the front door. However, the victim was met by another man kneeling at the rear corner of his house.

When the suspect saw the home owner, the suspect jumped up and yelled, “Oh sh*t.” He then ran toward the front of the house.

The victim continued to pursue the suspect and as he rounded the corner toward the front of his residence, he saw two (2) additional black males standing on his property.

The victim held one of the suspects at gun point for a short period of time before one of the other suspects yelled, “Leave my brother alone.” He then raised a shiny handgun, fired at the victim, and missed. The victim returned fire, striking the suspect in the stomach.

All four (4) suspects then fled the scene.

Deputies found flip-flop shoes that the suspects had been wearing at the crime scene along with a baseball cap. Additionally, deputies found two (2) handguns, one of which had been stolen from the victim’s home on September 25, 2014.

Cornelius P. Lewis, 23, and Darrell J. Brutton, 20, were arrested and charged with Attempted Armed Burglary. Lewis was previously convicted of Carrying a Concealed Weapon and Battery.

Caleb O. Brown, 20, was arrested and charged with Attempted Armed Burglary, Aggravated Assault with a Deadly Weapon, Use of a Firearm During a Felony, Grand Theft, and Dealing in Stolen Property.

Samuel R. Brown, 24, was transported to Ocala Regional Medical Center. Once released, he will be arrested and charged. Brown was previously convicted of Lewd/Lascivious Molestation on a child and Aggravated Child Abuse.

The driver of the Honda, Shawn Brown, was not arrested.

A stolen white GMC Yukon the suspects were originally driving was taken into evidence. Authorities found multiple license plates inside the vehicle along with empty gun cases. According to reports, there were also bullet holes in the SUV.

During an interview, the suspects told detectives that they just wanted to “look” at the motorcycle at the victim’s residence.

Detectives are now investigating to see if the suspects can be linked to other burglaries or shootings in the area.